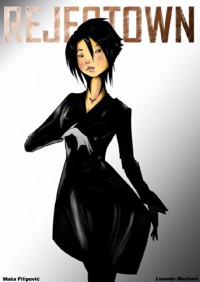 “This is the story about one world on the peak of civilization. They have a source of pure energy so they don't have to eat, sleep, work or die. Therefore, you have to gain your place under the sun obtaining human skills through seven circles of the Rejectown. What can be issues of such a world? What does it take to be a Human and what does it take away? “

I thought that the cover art was beautiful but the internal artwork is subpar at best and overall feels rushed and unfinished. It also had formatting errors as it did not fill up the entire page, in fact it took up less than half a page. There were also times in which the images would be turned on its side, which also made it difficult to read. This made it difficult and at times impossible to read some of the sentences .

Most of the commentary did not make sense . It sounded like something a person that was high would spout. ( or maybe a child) I did not enjoy the writing at all. For example a portion goes, “Not in more important direction. Much more significant thing will be when it passes through this same door, but the big one and in the opposite direction. If that ever happens. And to make that happen it was to do its best to deserve it.”.....what?! And this was present throughout the entire story.

I can forgive grammatical errors in an ebook story put into the world by its creator (even though it is so short that they should have easily been able to skim and fix any errors). I cannot forgive, however, the utter nonsense and lack of story. It was basically some strange rant created by someone out of their mind.

It also gave no explanation towards the concept of the humans and non-humans. The most it mentioned was that there were those that were once human, are human, or will become human (if I remember correctly). It did not explain what species or life forms the non humans were or how they changed from one to the other.

This graphic “novel” does not even deserve one star. A novel is supposed to have a story, conflicts, characterization, and resolvement. This story had none of those things and was the worst thing I have read all year. It only took me about 15 minutes to read, and I wish I had that time back because it was not worth the time. The only good thing about the entire story was the cool looking cover.